The soul of China’s coal

In China’s remote grassland region, geological conditions call for specialist knowledge and equipment as millions of tonnes of coal await extraction. China’s second-largest coal mining company is working hard on one of its newest operations in Ordos, Inner Mongolia.

China is the world’s largest consumer of coal, the black rock fuelling China’s industries and the nation’s rapid development. Used to generate roughly two-thirds of China’s electricity, coal also drives the country’s steel production. With the world’s third-largest coal reserves, China consumes and produces nearly as much coal as the rest of the world combined. And it is in Inner Mongolia that a significant amount of those reserves are found.

Around 90 minutes south of Ordos’s modern airport, alongside fields redolent of the grasslands and steppe that characterize this region, sits the Menkeqing coal mine.

Amid the trees and flowers decorating the area is some golf-course-quality lawn grass, according to the mine’s chief engineer, who is proud of the site’s landscaping.

The mine, which belongs to Zhongtian Hechuang Energy Company, was built in 2011, and production is due to begin in the second half of 2016. With around 1,000 underground staff, the mine is projected to achieve a yearly extraction rate of 12 million tonnes of coal, generating 3 billion Chinese yuan in revenue (475 million US dollars). The mine is tapping seams that hold 2.6 billion tonnes of coal reserves.

Before going into the mine, workers take their uniforms from their metal lockers, pull on rubber boots, cap their heads with helmets and lamps and walk through a turnstile to reach the mine’s elevator. The elevator cage is strong and sturdy as it makes it way down, reaching the entrance of the mine. The bright, spacious entrance has a sign in Chinese and saying ‘Menkeqing welcomes you’. The roads are slightly bumpy but clear and easily navigable for the trucks and 4x4s.

It takes about five minutes to descend to the mine, 795 metres below the surface. The temperature is a cool 25 degrees Celsius, with gusty ventilation as air from above ground is blown into the mine. Travelling via 4x4s, mine engineers and managers can traverse the many kilometres of tunnels that have been dug, as miners work in shifts to complete construction. China has over 90 percent of the world’s longwall installations, and Menkeqing is one of them. 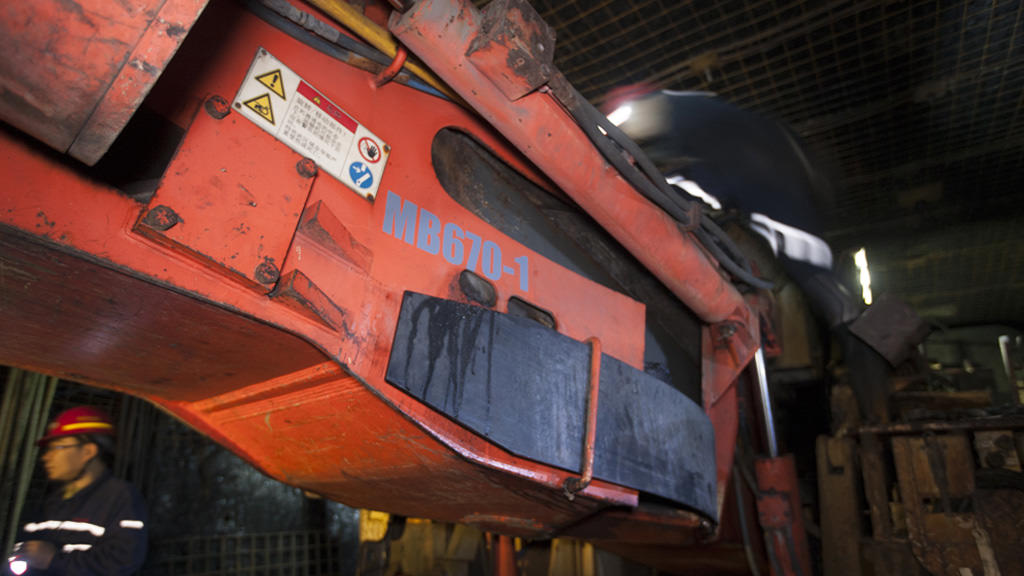 The mine operates two Sandvik MB670-1 bolter miners, which are designed to simultaneously bolt the roof and the rib of a roadway.

The mine operates two Sandvik MB670-1 bolter miners and has two additional units on site allocated for later use at another mine.

At the end of the roadway, a Sandvik MB670-1 bolter miner is making rapid advances while ensuring smooth floor conditions. Operator Chen Xiang Gong, 26, from China’s eastern Jiangsu Province, has been working at the mine for a year.

“This bolter miner is easy to learn and to operate,” says Chen, who likes to play basketball in his spare time.

Designed to simultaneously bolt the roof and the rib of a roadway, Sandvik MB670-1 is often praised among mineworkers for its ease of operation and usability. Chen’s team leader, Zhang Zhao Wen, a veteran of mechanical and electrical aspects of mining, says the bolter miner “has a lot of easy-to-use controls” that are conveniently located.

Han Wang Hai, Menkeqing’s vice chief engineer, says the Sandvik MB670-1 bolter miner suits Menkeqing’s geological conditions because it can protect the roof of the mine.

“The sides of the roadway could easily collapse, but we have instant support from the machine,” he says, praising the equipment’s safety and reliability. “With other machines, different roadheaders, we advanced around 300 metres per month, but with the Sandvik MB670-1 we advance 600 metres per month.” Further advances in speed are expected as operators develop an even more comprehensive understanding of the bolter miner. 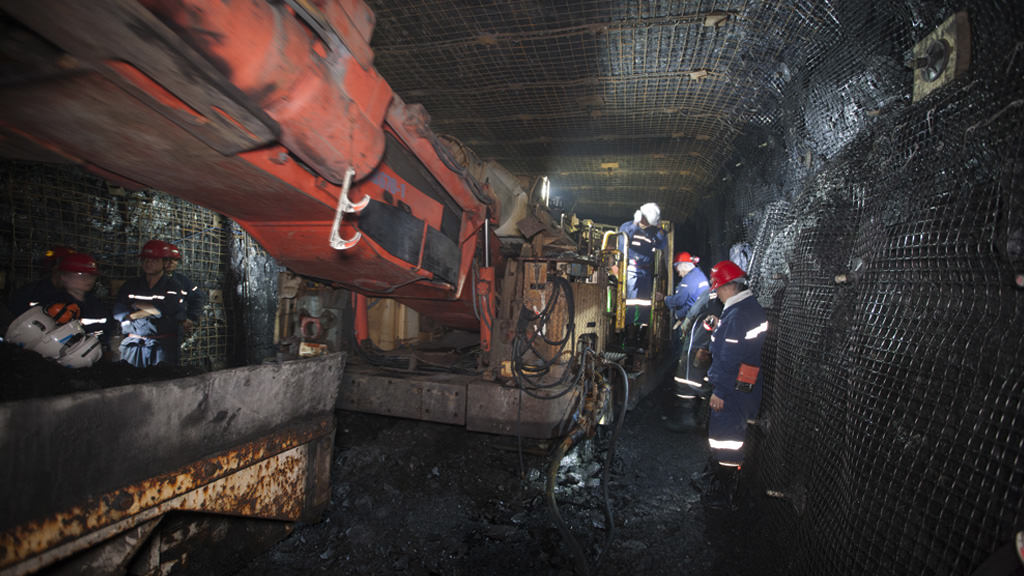 Safety is of paramount importance in the mine, and equipment operators are required to wear ear protection. Here the Sandvik MB670-1 has also innovated, reducing its noise output by more than 10 percent compared with previous equipment. Zhang Hong Qiu, 52, a veteran machine operator, says Sandvik MB670-1 is quicker than other bolter miners he’s used. Like others, he appreciates its ability to cut and support simultaneously, and he is always appreciative of low failure rates. Zhang Zhao Wen, the team leader, says the challenges of working in a mine include communication problems and slowdowns in the pace of work.

“But it’s helped when equipment has been made to be easy to operate as well as optimized for convenient access,” he says.

The upgraded Sandvik MB670-1 bolter miner has been deployed in Menkeqing’s vast tunnels, where it has helped to make roadways at twice the rate of the roadheaders used previously. Safety concerns have been allayed as the machine’s unique feature of simultaneously cutting and bolting has drawn acclaim from many of those either operating the bolter miner or overseeing operations at Menkeqing. Users have commented on the equipment’s reliability and ease of use, especially its convenient controls.

For a large-scale operation such as Menkeqing that must operate at speed, the upgraded Sandvik MB670-1 bolter miner is loaded with welcome new innovations that improve productivity, while lowering total cost of ownership and increasing quality. It is also recognized as one of the safest longwall development systems. For state-owned enterprises this is crucial, and Sandvik products have helped to bolster confidence in the site’s operations.

Modern society’s demand for metals and minerals will continue, as will its insistence that they are sourced sustai...

Since taking over as president of Sandvik Mining and Rock Technology in April 2019, Henrik Ager has guided his cha...

Improving the air down there

Creating better air quality in underground mining environments is one of the most pressing issues facing mining co...

Driving each other to safety

Dedicated to safe, fair and sustainable mining, the International Council on Mining and Metals is a collaboration ...

The EU-funded underwater mining project ¡VAMOS! continues to prove that conventional thinking can be overcome thro...

A quest to coexist

In a move to control energy costs, and take care of the environment, more mines are looking to renewable energy so...

The tough Sandvik HX900 material has helped a copper mine in Arctic Sweden improve environment, health and safety ...

First all-electric mine gets the green light

Sandvik and Goldcorp partner to develop the first all-electric mine in the world.